The 17th edition of the InterThales sailing competition, organised jointly by the sailing clubs at Thales Avionics in Meudon and Thales Systèmes Aéroportés at Elancourt, will take place in a fantastic location around the city of La Rochelle and the Ile de Ré, from Thursday September 29th to Sunday October 2nd 2011.

The regatta will be organised on one-design Grand Surprise boats, a modern and fast sailboat which is relatively straightforward to handle.

Thirty teams took part in last year’s event held on the Solent in England but organisers are always looking to widen the scope of the event, and would particularly like to see teams from countries who have not yet participated, such as Italy, Germany or the Netherlands.

Teams can include complete beginners, although an experienced skipper is recommended.

Programme for the 2011 event

·         Thursday September 29th: draw for the boats, inscriptions, departure for the Ile de Ré and training.

The inscription price for a boat with 6 crew members, accommodation included (3 nights), breakfasts, sandwiches at lunchtime, and the Saturday evening gala event is €2500 (or €2300 if the inscription is made through an associated works council)

Inscriptions need to be made before March 31st. Inscription for all boats will be confirmed after reception of a deposit cheque of €1000.

Inter-Thales Sailing Competition – a look back on the 2010 edition

Organised annually since 1995, the Inter-Thales sailing regatta celebrated its 16th edition in October with a competition on the English Solent, the first time the event has been held outisde of France. 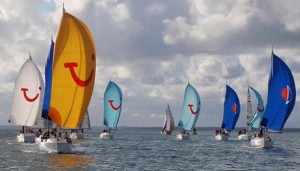 This year’s regatta was the opportunity to talk with some of the principal actors, look back on its history and discuss where favourable winds may take the event in the future.

The first regatta, organised in La Rochelle in September 1995, was the idea of Pascal Peltier, a Workflow Manager at Elancourt. “The objective was to organise a regatta with my friends from Thomson-CSF who like me are passionate about sailing, but also to introduce all company employees to the joys of sailing” he explains. “We wanted it to be open to everyone, from beginners to experienced sailors, but above all for it to take place in a convivial atmosphere”.

Eight crews competed on Figaro type boats at the first event, with a team from the Pessac site returning home victorious. In Brest two years later, the number of teams competing had increased to 23, and since then an average of 30 teams come together each year to compete for the Inter-Thales cup. The organising team behind the events changes each year, with volunteers from the chosen site having responsibility for finding a suitable location that offers a large enough flotilla of boats. The objective is to introduce something new and different each year, and as Pascal Peltier points out, “each organiser tries to bring a personal touch, either through a cultural initiative or by enabling us to discover a new environment in which to navigate.”

A trip across the channel

After spending fifteen years exploring the French coast, the Inter-Thales regatta crossed international waters for the first time this year and headed for the south coast of England. According to Laurent Chevalier, one of the most active recent organisers, the time was right for a new experience. “A number of British teams have participated in recent years, and we were itching to persuade them to organise something”. After considering a location in Scotland, the mythic Solent waters were eventually chosen because of the large number of boats for hire available in this famous sailing region.

If the event was able to take place in the UK at all this year though it was entirely down to the passion of the teams taking part. As Laurent Chevalier explains, “the cost per person of a regatta in England is very high, but one of the key objectives of the event is that it should be open to everyone and to mix social groups”. Whilst sponsors were being looked for, a mail was sent out to team skippers, asking for definite confirmations several months in advance. 24 teams immediately declared their support.

Sponsorship was provided for the fourth year running by Novalis, and 30 teams of 8 participants took part in the event won by a team from DCNS. The event was judged a great success once again, to the surprise of some of the British competitors. “The French crews at the regatta enjoyed it so much that many said that they want to hold the regatta in the UK again next year” said Matt Ledger from TUS in Stockport. “This was somewhat of a surprise to ‘les anglais’ because of the typically British wet weather we experienced this year!” he added.

The Inter-Thales regatta is in fact a series of races, some short (around 1 hour) and others longer (about 4 hours) covering a greater distance. Pat Betteridge, an engineer at the TUS site in Templecombe and organiser of this year’s event, saw first hand how competitive the event is. “The racing is taken very seriously” he explains, “but post race discussions are equally as animated with many stories being traded at the traditional end of regatta dinner!”.

“A boat is above all a team”

Beyond the pleasures of the sport and the ocean wave though, other key factors come into play. “A boat is above all a team” points out Laurent Chevalier, “but it is also something of a voyage of discovery. The boats are not large, and the eight team members must learn to live and work together in very close proximity”. In a successful team, each participant sees that their role is important and contributes to the overall success. “The values that are important on a sailing boat are actually very close to the Thales values – innovate, decide and react et agir avec rapidité, and above all, ‘en équipe, améliorer notre performance’” he adds.

What is the future for the event? For Pascal Peltier, who was already able to celebrate an emotional 50th birthday at a recent regatta, “my wish is to participate at the 20th edition!”. For others, the desire is to increase the scope of the event – which remains the only cross-Thales sporting initiative – even further and to encourage teams from more of the Thales countries to get involved. For this to occur though, it seems likely that a certain willingness to promote and support the event at Group level would be required.

All participants agree that taking part in the event is a life-changing experience, particularly afterwards in the workplace. Véronique Gasnier, a Communications Officer at Fleury-Orléans site was taking part in her first regatta onboard the site’s FLOR boat, and quickly noticed the special atmosphere at the event. “What I found particularly enriching in this competition, outside of the theoretical and practical training we received from a very good captain, is the human challenge of the experience” she explained. “With a mixture of people of all ages, all posts, all domains and all levels of sailing experience, who didn’t know each other beforehand, almost without preparation, we still managed, together, to succeed in a sporting challenge in the name of Thales and of our site”.

“The relationship between colleagues is never the same after a regatta” explains Laurent Chevalier. “It’s the occasion to develop real friendships” he continues, “and also the occasion to learn more about colleagues, who reveal different facets to their personalities during the regatta. It’s the occasion to discover people from your company who do very different jobs to you, who you may never normally meet, and therefore to create very strong ties in the company.”

Here’s looking forward to a successful event in 2011.